Featured article of the month is an exemplary article displayed on the Main Page each month.

Based mainly in the Trillian Sector, the Eternal Empire, commonly called the Jaggan Empire, is a nation that controls the Arcturus, Illumin, and Valorun systems. Originating on the planet of Jagga, the Eternal Empire can trace its origins all the way back to the ancient city-state of Everstone, one of the most powerful city-states of its time. Its first Eternal Emperor, Hunter I, built many monuments for Everstone, including the Tower of Glory and the Hall of Justice. When he...(Read More)

Shinraba is the capital and largest city of the planet Zaekyla. Shinraba is one of the oldest cities in the galaxy with very prominent Ancestor ruins throughout the cities. Shinraba is a massive city that takes up the majority of Eastrin and dwarfs other large cities like Cosseli. The government of Shinraba is a council with one representative from each of the thirty-one districts that comprise the city. Shinraba is best known for...(Read More)

The 31 ICS Ioroball Cup was the ninth edition of the ICS Ioroball Cup. The Cup was won by the team from Capital, which marked the team's second cup. It was the first ICS Ioroball Cup to feature sixteen teams (or anything more than eight). The ICS Cup Commission chose the planet of Aqualis to host the Cup in the year 27 for the nature of the planet's culture. As Aqualis is a colony of Crelina...(Read More...)

Agrysis is the capital and main city of the planet Silei. It is part of the ecumenopolis that makes up most of the planet's surface. It is from this city that almost all major galactic governments of the Avopei-Larru galaxy have held their power. Agrysis has been the center of politics and culture for a number of years and has only faultered culturally to the city Castenona on Crelina since the rise of the Iorou species to importance.The city is located (Read More...) 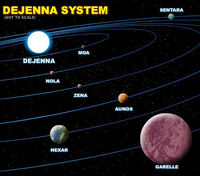 Dejenna is the home star system of the Hexarian race. It consists of a bright and relatively young blue star, with seven planets. The three smallest, innermost planets are known as the Little Sisters. The fifth, Hexar, is the ancestral homeworld of the Hexarian and Kvorn races...(Read More)

The 35 ICS Ioroball Cup was the 11th edition of the ICS Ioroball Cup, and was held at the Cosseli Grand Stadium in Cosseli, Ma'Paler. The champions of the Cup was the Crelina planetary Ioroball team, marking the team's fifth ICS Cup since it's formation. The cup used a different structure to the surrounding ICS Ioroball Cups, which used four-poules-of-four-teams systems, followed by quarterfinals. This cup used an additional single-elimination-match instead of poules to decide which eight teams would advance to the quarterfinals. While the cup was already in progress, the decision was made to include consolation brackets, which were held after the main tournament. When the consolation brackets were already in progress...(Read More)

The Republic experienced a golden era following the supposed destruction of the Empire. In 71,756, resurgent Imperial forces began to attack the Republican frontier, sparking a war that lasted four years. During this war, the Senate imposed reforms to protect the government; unfortunately, this destabilized the government and sent the Republic into a depression for almost a thousand years. At the end of the depression, another war with the Empire devastated the Republic... (more...)

The Antheons were an advanced civilization that emerged more than 7 Gda ago on the planet Eon in the Antheon System. They were the first known species to accomplish interstellar travel, and they did so independently—in contrast to most subsequent civilizations which used the knowledge of prior civilizations. After achieving spaceflight, they developed a near-instantaneous form of travel, which they distributed throughout the galaxy.

The Antheons are commonly believed to have reached a type A society in popular culture. However, archaeologists do not believe that there is sufficient proof that they did. They disappeared from the Basilicus Prime Galaxy approximately 300 Mda before... (more...) 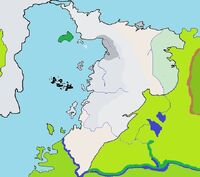 Cosseli is the largest city on the planet of Ma'Paler. The city is broken into nine districts that divide the city, which sits along the eastern coast of the Aebrey Ocean. Cosseli has long been known as a tourist and educational center. Cosseli continually has some of the most tourists of any of the Core Worlds in the Avopei-Larru galaxy. Cosseli is also home to many of the most prestigious universities in the galaxy. SkyTram began its first run in Cosseli and has since become one of the largest of SkyTram's systems. Founded in 5412 BKR, Cosseli has... (more...)

Tatah Tetel is a large terrestrial world in the Alusio System of the Avopei-Larru Galaxy. It is often considered an idyllic planet, covered in beautiful sparkling blue oceans, continents covered with lush landscapes, and white clouds. In recent years, Tatah Tetel has held a high place in galactic politics, and is a prominent member of the Independent Coalition of Systems. The planet has experienced a rough history especially in the past two thousand years. It has suffered large scale destruction through the three Galactic Wars and many wars prior. However, the people of Tatah Tetel have continually rebuilt their oceantop cities. The planet is home to a variety of important people in the galaxy... (more...)

The Vendian Empire is the oldest nation of Crystaldeep. It was formed from the merger of three of the strongest ms on the continent of Vendi during Crystaldeep's feudal era. Formed in 18,865 GST, the Vendian Empire has since formed colonies on the continents of North and South Astion. Colonies on the western coast of North Astion rose up and achieved independence and formed the United Provinces of the West. Since that time the Vendian Empire and the UPW have clashed multiple times. This has caused much anti-UPW sentiment in recent years. (more...)

The Kelos System is under the influence of many political entities. It is governed by a system of common law that was agreed upon by group of elected representatives of hundreds of countries called the Congress of Crystaldeep. (more...)

See all featured articles – Vote for featured articles
Retrieved from "https://basilicus.fandom.com/wiki/Basilicus:Featured_article_of_the_month?oldid=22536"
Community content is available under CC-BY-SA unless otherwise noted.