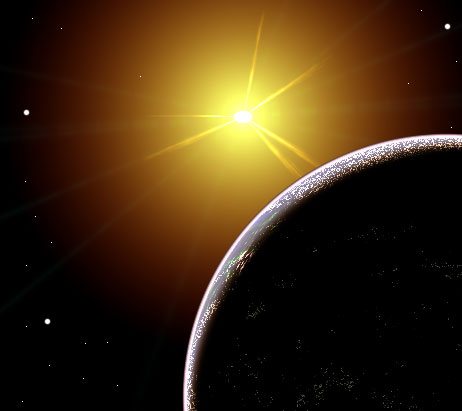 A lot of what was famous two hundred years ago was destroyed by the Arrq Invasion. Having researched the planet thoroughly before they arrived, the Arrqs knew just where to strike. Generally, wealthier countries saw the most damage, whereas poor countries remained the same. While many of the political borders stand from before the invasion, countries were forced to unify their economy to rebuild. Major western powers unified under the United North Astion Trade Agreement.

By the time the Highlords and Helics rushed to Crystaldeep's aid, irreversible damage had been done. The Highlord Alliance had no resources at the time, to assist the damaged planet, but vowed to keep the Arrqs outside the borders of the Kelos System while Crystaldeep rebuilt.

During the next twenty years, Crystaldeep fell into chaos. Resources like power, water, and oil were at a complete standstill. Society fell into a dark age while governments scrambled to rebuild and establish order. Many governments were overthrown and the cities of the world were left to reckless abandon as anarchistic crime ruled.

With help from the Helics and the Highlords, much that was needed was finally restored and cities were rebuilt. Because of the setbacks, however, nearly a hundred years of normal technological advancement was completely lost or seriously slowed. After the Congress of Crystaldeep was established and many alien technologies were assimilated, technology progressed exponentially over the next fifty years.

Today, many of the old political boundaries remain the same, but with far more cooperation than before. With the advent of the Congress of Crystaldeep, the planet has been without war since the invasion. With the exception of the conflict with Rannella, it was the first time in Crystaldeep history that the countries of the world remained at peace for so long.

Most countries looked to the interterrestrial resources of the Kelos System to make up for what was lost through environmental depletion and the Arrq Invasion. Economic and political interests quickly drew the people of Crystaldeep to other planets. While most of the population remained in the Kelos System, there were several other systems colonized by nations or independent colonies (including Midpact, one of the highest populated planets in the known galaxy). The exodus of soon-to-be Rannellans put a dent in Kelos System population, but, at the same time, extended their settlements far into other worlds.

Crystaldeep is a very tectonically active planet. Coupled with constantly moving continental plates and a relentless weather system, the geology found on this planet is full of variety and value. Millions of years of life has yielded fossil fuels, however they were greatly depleted in the last two hundred years, most modern fossil fuels come from Rola. Active tectonics have yielded huge amounts of gemstones and precious metals that have been harvested throughout Kelosian History.

Tectonics also played a great role in the formation of terrestrial continents as well as their various mountain ranges and ocean basins. There are seven continents ranging in shapes and sizes. The continents were once one, but have been separated over millions of years of tectonic activity.

Although less active than in its youth, Crystaldeep is still home to earthquakes and volcanoes along tectonic fissures and continental fault lines.

Crystaldeep's geography is very dynamic. Features ranging from mountains to oceans are home to almost every possible kind of geological formation. Two major land masses are separated by the Erran Ocean and Pafian Oceans and a third land mass lies directly over the northern pole of the planet.

The western land mass is home to two continents held together only by a small and narrow plot of land. North Astion's major features are the Pearl Mountains and Silver Mountains to the west, the Lomar Plains in the midwest, and the urbanized eastern coast. To the south are great deserts that form into rainforests in the southern regions. In South Astion, most of the continent is home to rainforests and rural settlements. The Sortan Mountains line the southern peninsula of the continent and the massive Sortan River cuts through the rain forests from north to south.

The eastern land mass is much larger than the west. Temperate lands of Fresca to the north are separated from the large and tropical Torra Continent in the south by the Domar Ocean. To the east is a desert region and farther along is the largest continent on the planet, called Haro, home to the planet's highest mountains, the Haramanos. Haro contains almost every climate and geographical region possible ranging from rain forests in the south and deserts to the west.

The final continent on the planet is Tarcia. Although mountainous from tectonic activity, the land mass exists almost completely under ice at the northern pole of the planet. It is completely inhospitable and is home to very little biology.

The largest influences in the Congress of Crystaldeep is the UNATA Even the various alliances and organizations have many nations included in it, for example, although UNATA functions as an economic unit, the alliance consists of a dozen nations.

Most people on Crystaldeep live in an urban environment. Although rural societies still exist, they are far less prevalent than two hundred years prior. Most agriculture is processed in manufacturing plants and mining is almost completely extraterrestrial. Jobs in the urban societies include mostly the service industry and white collar positions. Many blue collar jobs that used to be the hub of industrial societies have moved to other planets and moons. Finances, retail, research and development, medicine, law, design, and entertainment are the primary industries coming out of Crystaldeep.

Although there have been no political conflict with the nations of Crystaldeep for a hundred years, there are quite a bit of politics. Financial competition between IAC and UNATA is extremely tense, border conflicts have caused more than a few public disputes. Ethnic cleansing is still practiced by certain uncivilized areas. Many South Astion nations have demanded representation in the Congress of Crystaldeep and the more they are ignored the closer to revolution they become. With constant threat of war from the Arrqs and Rannellans, Crystaldeep is a very politically tense place.

Even with the Congress of Crystaldeep there is great heated debate on policy. Huge factions in support of isolationism from the Highlord Alliance have rallied international support against those in favor of employing Alliance help against the conflict. Without political unity or strong leadership Crystaldeep could find itself in its own Civil War. Such an event could mean the complete annihilation of Kelos government and leave it open for Rannellan invasion, or worst still, Arrq invasion.

Civilization first appeared on Crystaldeep circa 20,000 years ago. The species now called Highlords, were the first to gain sentience on the planet and develop a society. Their civilization evolved through sophisticated philosophical systems ultimately resulting in subatomic manipulation of the physical universe.

Their high understanding of the nature of reality and specifically the planet allowed them to foresee a magnetic polar shift of Crystaldeep. The surface damage as a result of such a shift would result in terrible consequences to civilization, so the ancient Highlords organized an exodus off the planet. Unfortunately their tools could not support the manipulation of such a large scale and all those left behind experienced the complete destruction of their civilization's center, the city Thelantis. Although most of the ancient Highlords safely made it to their new home Nelwick, those left behind were left to deal with the oncoming polar shift.

When Crystaldeep shifted poles there was a planet-wide cataclysm resulting in terrible tectonic activity and climate explosions resulting in volcanoes, earthquakes, floods, and hurricanes. Most of the population left from the exodus perished during that time and civilization was completely lost.

Kelosians did develop civilization, at last, owing quite a bit to Highlord influence. Highlords were revered as gods and their work thought of as miracles. As time passed and generations of Highlords survived the cultural explosion of Kelosians, the remaining Highlords spent their lives meddling in Kelosian society in order to evolve them quicker.

Highlords, in later generations, got wrapped up in Kelosian politics and throughout history developed warfare amongst themselves using Kelosian societies as pawns. When at last they realized they had no time to waste to get all life off the planet, various rushed "conspiracies" resulted in a violent and turbulent hundred years. Just as the remaining Highlords came together, the planet was invaded by Arrqs.

Kelosian civilization for the first time found out about their true place in the universe and an even more shocking discovery was that the entire history of the planet was coordinated by ancient cousins determined to get them off the planet. Although modern Crystaldeep-bound Highlords evolved very differently than their brothers (becoming more and more Kelosian over time), they were quickly rejected by Kelosian society and forced to leave their home of 20,000 years, to join their distant brothers on Crystaldeep.

For the first time in Kelosian history, Kelosians were left to evolve on their own and at their own pace. Loosely aware of the threat of eminent polar shift, their sights fell on more immediate problems with the Arrq Invasion. The Congress of Crystaldeep was developed as the body to represent the Kelosian race to the rest of the galaxy. Their alliance with Highlords and Helics, however, did not sit well with the majority of the population, despite the fact both civilizations helped save the extinction of from the Arqs. A rebellion of ideas occurred and those who disagreed with the Congress of Crystaldeep established their own civilization in the Rannella System. Recently disputes between the two have resulted in near civil war.

Crystaldeep is now a planet of transition and political tension. Experiencing a two-front war between Arrqs and Rannellans and diametrically opposed ideals within their system-wide government, the civilization is on the brink of complete collapse.

This is a task list for this article. When you have completed something that is listed to your satisfaction then type an "x" in between the brackets on the edit screen. If you find something that is not complete to your satisfaction and it is "checked", then remove the "x" within the bracket. If all tasks are complete, go ahead and delete this section.

For help on using the World Work in Progress task template, visit this page.

3
A
B
C
F
L
N
T
U
Retrieved from "https://basilicus.fandom.com/wiki/Category:Crystaldeep?oldid=23748"
Community content is available under CC-BY-SA unless otherwise noted.