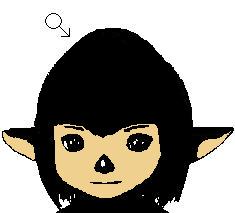 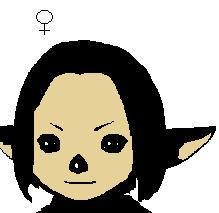 Forseers are so named because of their unnatural ability to forsee future events due to a mutation caused by the curse from the Dark One.

The only native Aragithians that were created by the Creator that exist to the present day, Forseers are very short in stature. They have pointed ears and noses like an animal's. All of their other features are that of Kelosian children. Despite their small size, Forseers have an undeniable temper and on top of that are extremely lazy when it comes to anything but fun. Forseers reproduce sexually; the female's gestation period is 4 months.

Forseers are the only Aragithians that have made it outside their homeworld. A small group of Forseerian mages created a small tear in reality during The Dimension War, transporting Kelosians to Aragithia from Crystaldeep, and transporting the mages to Jijitris. After 2,000 years of building on Jijitris, the mages had created modernized technology, including space travel. The art of Duaess was forgotten on Jijitris, the Forseers there began to rely more and more heavily on their inventions.

Afraid of returning to Aragithia for fear of the Creator's wrath and wanting to horde their intelligence, the Forseers of Jijitris remained on their new planet except for small groups that periodically ventured out into the rest of the Genesehres System, and eventually outside of it, to find new places for new beginnings.

Forseerian culture is not complex, but is practiced by Forseers all over the galaxy, except for those on Jijitris.

Forseers are very intune with the unnatural, including magic. Although by far not the strongest species in existence, they are the one of the most intelligent, and are the only ones who can control magic from the day they are born. Forseers have a deep respect for the Creator and a burning hatred for the Dark One. They live throughout the Genesehres System and get along with almost all other races. Having travelled outside their star system just over 500 years before the present, they are not very integrated into interstellar society.

In their worship of the Creator, the Forseers created a religion based on ancient magic in honor of their maker, called Duaess.

Forseer children become recognized as adults at the age of 25; during this period of recognition youths must complete a series of challenges testing endurance and intelligence.

Retrieved from "https://basilicus.fandom.com/wiki/Forseer?oldid=19700"
Community content is available under CC-BY-SA unless otherwise noted.