Basilicus Prime Space Travel and Technology can vary from civilization to civilization. There are, however, many methods or variations of methods that are commonly used throughout the galaxy. This article summarizes them. 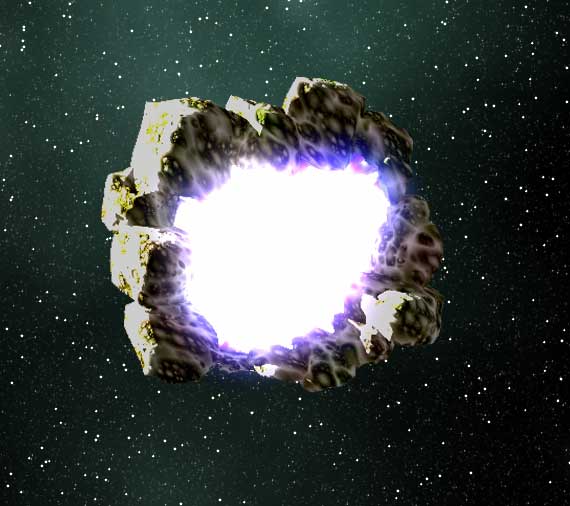 Created 2 billion years ago by the Antheons, the Antheonic Rings are the safest way to travel great distances. They are large, planetary machines that make modern interstellar travel possible.

Although scientists know the principles of the Antheonic Rings, they don't know how it fundamentally works or even what energy makes it work.

Nothing displays more the Antheons' ability to cheat time than the Antheonic Rings. When travelers enter a ring, another dimension is added to them. Being fourth dimensional they are separate from time (i.e. it no longer takes time to go distance) then they enter the ring of destination at the moment they left safely third dimensional again. Since the trip is "timeless" travelers must be frozen or they could instantaneously age and die. Those that were conscious during a journey through the rings have never returned not being able to join the third dimension again. Possibly these travelers are forever suspended in non-time, never to wake.

The Antheons were so good at this technology that they made thousands of rings throughout the galaxy. Many of these gates have yet to be discovered.

A fairly recent technology developed by the Helics, STW Routes are the most common mode of interstellar travel in the galaxy. In short, STW Routes work by emulating the frequency of Space/Time and increasing the wavelength so that objects affected by the frequency are pushed faster than the rest of the universe.

An STW transmitter and receiver are set up at various points between two locations. They transmit electromagnetic radiation at Space/Time's frequency. Properly equipped vehicles can tune into that frequency when in the transmissions path. Once tuned, the wavelength is altered effectively pushing the route beyond Space/Time. This exponentially decreases the time it takes to cross interstellar distances. Although actual speeds vary depending on the route, STW Routes can take spacecraft 1,000s of times the speed of light.

Most spacecraft are equipped with high velocity thrusters that can push them at over 6.6737E-6 Holds per Galactic Hour. Sometimes they can go even faster, but many star systems have strict speed limits in place to avoid problems. High velocity spacecraft can be destroyed by small pieces of debris if they aren't properly equipped.

Depending on the planet, most spacecraft can exit with its own thrusters on designated flight paths. Planets with particularly high gravitation may need exit assistance with higher-powered spacecraft or rocket technology.

Re-entry is performed through a systematic degrade in orbit around a planet's atmosphere. On populated worlds the spacecraft is given a clear flight path to follow. Orbital Degradation can take several minutes, but some flight paths take the spacecraft in quite quickly. Spacecraft cannot generally fly straight into the atmosphere unless they are properly equipped, as is the case with some military craft.

Although most local (i.e. planetary) communication uses standard transmitting/receiving variations of Radio Frequency, interstallar communication is a bit more complicated. Photon Communication, created by Communications Plus, Inc., is a technology using the science of photon reversal. This allows broadcasters and receivers to communicate with no delay at all, even when at different ends of the galaxy. Photon communication became the backbone of CommPlus's TerraNet and is the only known technology for interstellar communication.

Developed by Communication Plus, Inc., TerraNet is the largest network of information systems in the Galaxy. Based on photon reversal technology, all those connected to the network can access information hosted from anywhere in the galaxy.

TerraNet is usually accessed through a MSLI ([[Motion Sensitive Light Interface)). MSLI is the standard for Information Technology (IT) and can come in various forms. Most users have a small pad that will project the interface. The user's motions send command signals to the IT's processor. Other IT's can be integrated into Pho-Comms, fashion accessories such as eyeglasses and time pieces, or built into desks and walls.

Retrieved from "https://basilicus.fandom.com/wiki/Kelos_Sector_Technology?oldid=24226"
Community content is available under CC-BY-SA unless otherwise noted.